« Back
HostNation Blog Post
Loving the Stranger in the Time of Coronavirus: The HostNation Story
ANTHONY BERMAN

Anthony Berman gives a personal account of HostNation, before and after COVID-19, and the benefits it has brought to refugees and asylum seekers and their befrienders. 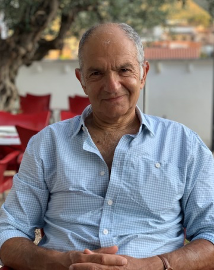 The story began for me in early June 2017 when I met up with Anneke Elwes and Rossana Horsley in a Kentish Town pub to discuss Anneke’s plans for HostNation. Twelve years earlier, Rossana and I had been part of the same cohort in a befriending project at the organisation, Freedom from Torture (FfT); we were matched with unaccompanied minors from trouble-torn foreign countries in an attempt to bring some normality to their traumatised lives. Anneke took part in the same programme a couple of years later and then went on to help run a holiday scheme at FfT where around 100 of their asylum-seeking clients spent an annual holiday with a British family. The positive effects for both parties of both befriending and hosting gave her the idea of launching HostNation.

It struck Anneke that the only contact most asylum seekers and refugees have with British people is in a professional capacity: social or case workers, lawyers, therapists, doctors or Home Office officials. She knew that there were many altruistic people in the host community wanting to offer friendship but not knowing how to go about it. The solution: a digital platform to match UK citizens with asylum seekers and refugees in befriending relationships. The scheme would start in the Greater London area and if successful, be rolled out in other parts of the country. With Rossana and me on board, we were joined shortly afterwards by Magda Wolfe who was doing a Master’s in Social Policy and Research; Anneke now had the small team that she needed to embark on this journey. HostNation was on its way.

We started matching people in October 2017. Volunteers could register on our database by completing a detailed online form and supplying photo ID and two referees and were then screened by telephone by one of the team. Asylum seekers and refugees were referred to us by caseworkers, psychotherapists and other professionals at refugee support organisations, who felt that a befriending relationship would benefit their clients. From a map on our dashboard we would then match people according to proximity, gender, age, interests and personality and then arrange an introductory meeting.

Some of our befrienders had worked with asylum seekers, either professionally or as volunteers in the Calais “Jungle” or in Greece but many excellent befrienders had no experience whatsoever. Regardless of background, everyone was required to read our Befrienders’ Guide, which was both a comprehensive guide to the day to day challenges confronting asylum seekers and refugees, as well as being a detailed roadmap to the befriending process and the challenges it can present. Befrienders were asked to commit to meeting up with their befriendee at least fortnightly for three to four hours over a three months period. At these meet-ups they would do the sort of things friends do: visit a gallery, cinema or street market, go to a gym class, watch a football game, enjoy a stroll in the park, a meal, or simply hang out together.

After the face to face (F2F) introductory meeting facilitated either by the referrer or more usually by a HostNation “matchmaker,” we adopted a hands-off approach. We didn’t want to be prescriptive in the way friendships developed. Volunteers would bring their varied personalities, interests, skills and experiences to the role of befriending and the same applied to the asylum seeker or refugee they were matched with. We checked in after a month to see that things hadn’t stalled at the first hurdle and then again after three months to get more detailed qualitative feedback from both parties.

HostNation had become a well-established player on the refugee support scene. We’d secured charitable status and three of our four trustees were befrienders themselves. The same management team of four people who’d started out together three years earlier were still in place. We had become an extremely close-knit team, totally committed to the universal altruistic impulse of loving the stranger. But most important of all, between October 2017 and March 2020 we had made three hundred matches. Detailed evaluation of qualitative feedback from befrienders and refugees revealed that the vast majority of these matches had produced a positive outcome. In over 80% of cases people felt they were likely to remain in touch over the next 12 months and in 58% of cases a “a genuine and very positive friendship” had developed. When asked to rate the positivity of their experience out of 10, the mean score for befrienders was 7.9. Refugee responses showed that their English had improved, they felt less lonely, had a greater sense of well-being and inclusion and would definitely recommend befriending to others. For both parties it was in many instances a life changing experience as some of the quotes below amply illustrate:

I am so happy to have met Katy and her husband. They are really lovely and kind people and we are friends now. Every time we meet is the best time!

It is helpful to make a friend, you see things better, can go out in London, otherwise it is very hard, it makes a difference. The best bit was meeting his family as I don’t have any family.

Actually, I LOVE having a befriender, because from your organisation I can find a friend, share my feelings with her, go out with her. For me for the first time I’ve had a good friend here in the UK. Thank you to the organisation.

She's always communicating, to know what I'm doing, taken me to different places, explaining things. It's made a very big change. To have someone who cares.

I think it is motivation and positivity that she has given me, positive support that motivates me in terms of trying to do something for myself. It allows you to be more yourself. I recommend it 100%.

I feel that already he is another member of my family. Ismail has had a huge impact on my life already and I can only thank you for that. I can honestly say that joining Host Nation is one of the best and most rewarding things I have ever done.

It has added a lot of value to my life. I have the impression we will be friends for life, as I said, Raha is great!

It's like with mentoring, you think it's about giving something back, but you get so much back yourself. it's so enriching. At least 50% of is what you get back.

We live in the city and take so much for granted. Sometimes he stops to take photos of things I don't notice, he re-established my relationship with London.

This happy HostNation story came to a juddering halt with the arrival of the Covid-19 pandemic. With the lockdown in March we were forced to suspend our matching operation. Instead of meeting up for a stroll round a gallery, a kickabout in the park or a leisurely chat over coffee, people were now limited to keeping in touch via WhatsApp, texting and phone call. Nevertheless, this contact was still a great source of comfort to refugees and asylum seekers whose loneliness was now compounded by enforced quarantine in often miserable circumstances, without many of their support services and places of worship.

With the easing of lockdown restrictions, and the need for befriending more acute than ever, HostNation, with the largest online resource of volunteer befrienders in the UK, was ready to meet the call. We re- opened for referrals in early July but of course, in a time of social distancing, it couldn’t be business as usual. Our model is now one of smart befriending, a hybrid, where friendships are conducted online as well as F2F. Introductions now take place via Zoom or WhatsApp video and people keep in touch with each other this way. There is no pressure to meet F2F but in the matches we have made since re-opening, both parties have been keen to meet up in person. This could of course change in the autumn or winter if there is a spike in infections.

And what of the future?

We are activating Anneke’s original plan to extend HostNation throughout the country by opening hubs in the north-east and north-west of England before the end of the year. Unfortunately, because of the pandemic, we had to cancel our annual summer party for befrienders and befriendees and our occasional F2F workshops are also off the agenda. Instead, we now keep in touch via bimonthly Zoom webinars and monthly newsletters to our matched befrienders. One of our volunteers said the best thing for her was feeling part of the HostNation community and that is a sentiment we are keen to nurture.

From a personal point of view one of the most rewarding aspects of this work has been to witness, despite the negative attitude in government and much of the press, the number of people of all ages and backgrounds, not only willing but eager to form a relationship with an asylum seeker or refugee and try to make them feel at home in a strange country. This quote from one of our befrienders sums it up perfectly: