Tes loves football, cooking, music and history. He has a contagious sense of humour and is very sociable. He has three master’s degrees.

He is also an asylum seeker. Tes ­– short for Tesfabrhan – arrived in Middlesbrough six months ago. “I escaped the dictatorial regime of my country, Eritrea, in September 2017, shortly after my wedding,” he tells us. “Since then, it has been such a long, demanding journey to get here – to the promised land, to liberty and opportunity.”

You can read Tes’s personal testimonial below.

Far from home and missing his wife desperately, he needed friends. “Adapting to a new social environment when you’re suddenly dropped into an unknown community is pretty hard,” he explains.

Time spent living and working in Uganda and Ghana had taught Judith what it’s like to be an outsider, as she explains to BBC Radio Teesside in the interview with her and Tes (above).

“In Ghana, I was the only white person living in this small town,” she says. “So I kind of had an insight of being in a strange place and knowing nobody.”

It turned out well for Judith, because of the warmth and kindness of the local community. “I was so well received and people were very friendly,” she recalls.

The experience made her want to reciprocate by making someone feel welcome here in the UK in turn. “When I saw this project advertised I thought, yes, that’s something I would definitely like to do. Turning up somewhere where you know nobody, it must be just petrifying.”

Middlesbrough houses a disproportionately high number of refugees and asylum seekers and Judith feels her community has done a great job in providing a welcome. She says:

“I am proud of the way my town has assimilated refugees and asylum seekers so successfully."

Although she and Tes were only introduced by HostNation North-East seven weeks ago, they are already off to a great start. “It feels like seven years!” exclaims Tes on the interview.

“We really chat open-heartedly about everything. The befriending scheme…really made a difference in my life.”

He appreciates Judith’s interest in African affairs and finds they have a lot to talk about: “The quality of HostNation’s befriending service is in the effort they make to find people who are compatible, by looking at a wide range of details from professional background to hobbies. So it’s no surprise to see they made me a perfect match! Judith has not only been an indispensable friend but a trustworthy advisor.”

When the BBC reporter asks Tes if he feels at home now, he bursts out irrepressibly: “Way, way better than the way I was when I arrived here!” And, echoing the popular local chant much heard at football matches, Tes adds: "I feel a bit like a T-T-Teessider!"

Judith is also getting a lot from the friendship, as she explains: “I’ve really enjoyed it and I’m glad that it’s been beneficial. It’s what people need in a new setting. I think it’s a really lovely thing to do.”

So, to Judith and Tes, all of us wish you a long and happy friendship, and a positive outcome for Tes’s asylum process.

"Thanks to HostNation for the blessing of friendship.”

I escaped the dictatorial regime of my country, Eritrea, in September 2017, shortly after my wedding. Since then, it has been such a long, demanding journey to get here – to the promised land, chasing liberty and the opportunity to start a new life.

It has been more than four years since I have seen my wife. I confess the misery of life’s ups and downs has been almost unbearable. Much of what I suffered through can’t be told in this brief article, but the loneliness of the traumatic journey and my challenging psychological issues can perhaps be understood.

Speaking from my heart, I'm so worried about my wife. I can't wait to reunite with her, my sorely-missed soulmate, to feel once more the warmth of our love.

Yet I keep my hope ablaze, inspired by a saying from Joe Neguse, an Eritrean-American member of Congress with a refugee background: “Fear is contagious but so is hope”.

Light at the end of the tunnel

Since my feet touched UK soil, I have felt my despair fading as my soul started to see a twinkling light at the end of the tunnel. I have been chasing this ray of hope ever since.

The value of befriending as a project that heals scars and provides a safe anchor in the host community is so important. My arrival in the UK and Middlesbrough in particular, with the burden of trauma I carried (like many if not all asylum seekers), greeted me with both a reward – a sense of freedom and possibility – and a challenge: that of cultural adjustment to British life.

Meanwhile the pandemic has limited Home Office operations and delayed the asylum process in an unprecedented manner. Though it’s understandable that their office has been stretched thin to catch up with asylum cases, the stress faced by people like me during this time is intense.

In this situation, HostNation’s programme of finding a local person to befriend an asylum seeker is second to none!

To distract myself from homesickness, and wanting to give back to my new host community, I have been volunteering for several community-based organisations and local NGOs such as the Refugee Council, UK Shelter, Green Shoots Middleborough and the Red Cross.

But there’s nothing like the value of befriending when trying to settle into a community. Adapting to a new social environment when you’re suddenly dropped into an unknown community is pretty hard, and can compound the psychological challenges that an asylum seeker is already facing. HostNation has responded to this need with flying colours!

Thanks to their office in Middlesbrough, who connected me to the friend I needed, things couldn't be better. 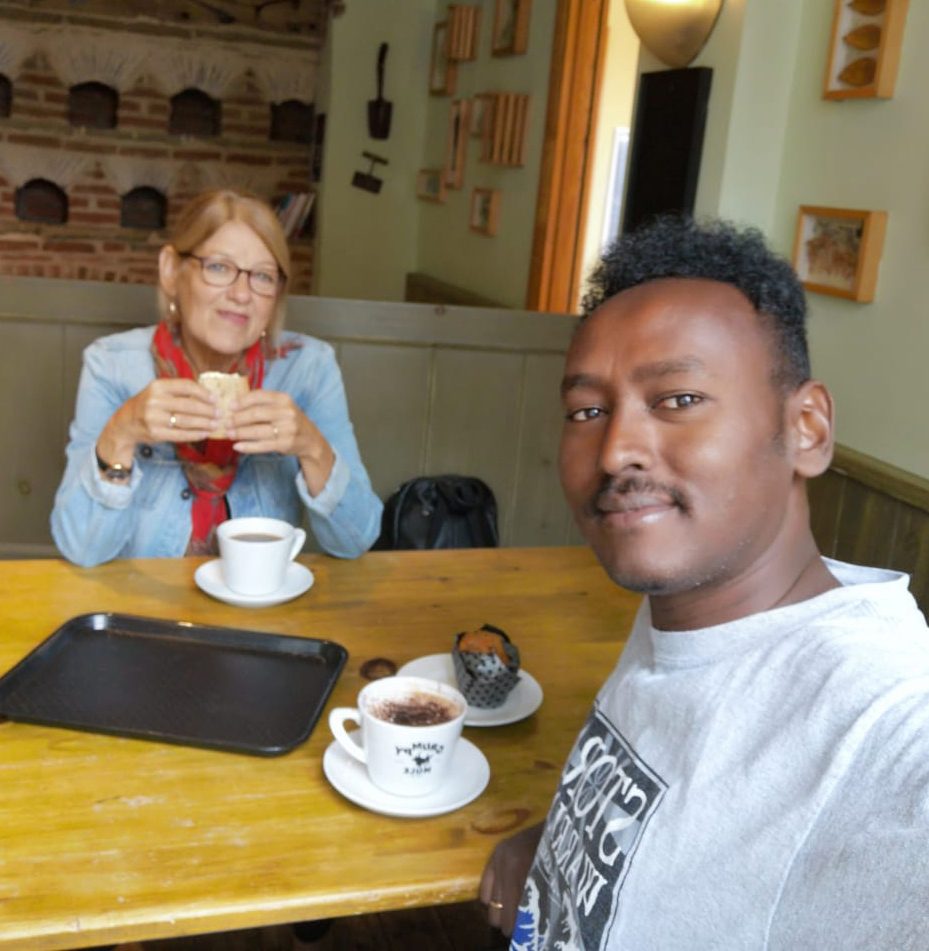 The quality of HostNation's service is down to the effort they make to find people who are compatible across a wide range of categories, from professional background to hobbies. So it was no surprise that I landed a perfect match!

Judith has not only been an indispensable friend but a trustworthy advisor. She’s a proud Teessider who loves discussing both local and global topics. We are perfectly suited in the things we like to talk about, proving the success of the matching process.

"Since the start of our friendship, my life has changed significantly – simply because I met someone who cares and supports and informs and open-heartedly chats with me about the daily hassles I struggle with as I adjust to life here."

On top of that, we swap reading linked to both our interests, predominantly political and cultural matters. The information exchange goes both ways; I think I’ve helped her to delve deeper into the African issues she was already interested in. 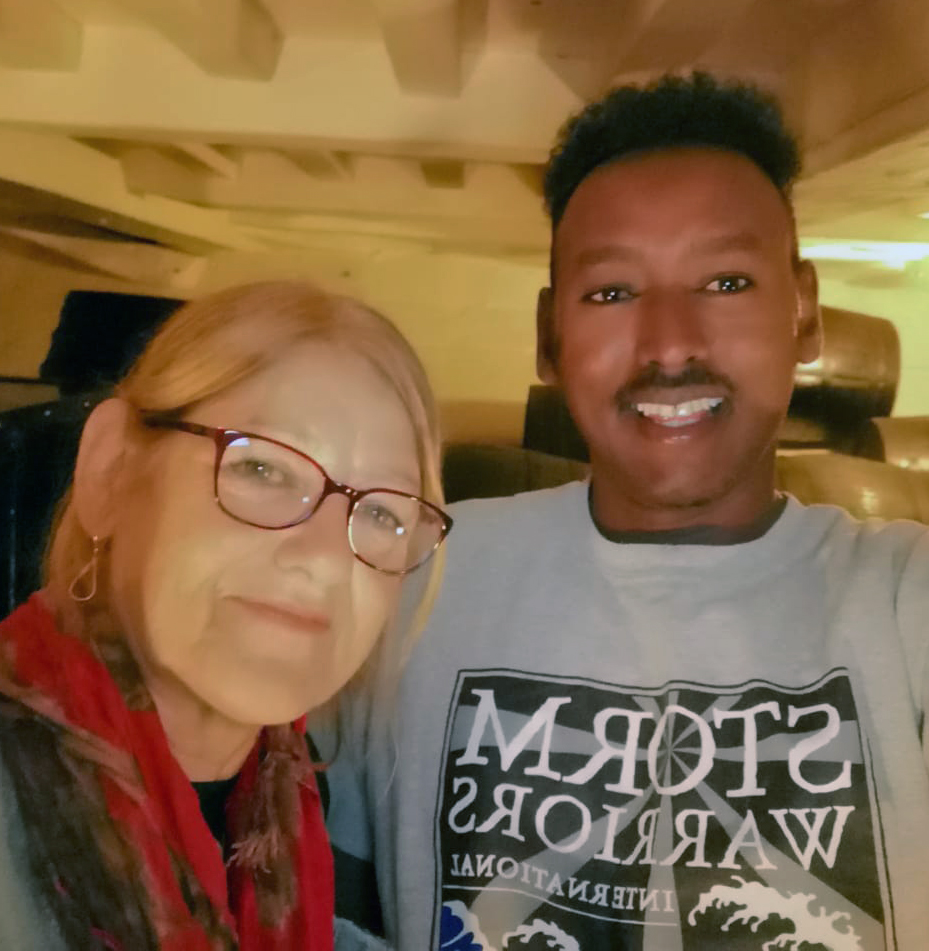 The huge jump I have made in acclimatising myself to my new community would have been unthinkable without her. We regularly hang out around Middlesbrough and nearby Teesside towns and villages and historical sites such as museums, to help me understand the structural and sociocultural fabric of the northeast and the UK.

Through Judith I’ve met her whole family at several family gatherings. This has renewed my hope of building a new life and given me the confidence to settle into this new social environment.

I firmly believe this friendship will continue unabated lifelong, and I'm more than honoured to have made such a heart-warming, exceptionally caring friend.